The news of Kim Kardashian choosing to use a surrogate to have her third child with Kanye West was big to those of us whose guilty pleasures include Keeping Up With the Kardashians and their ongoing pregnancy announcements and rumors. (Yeah, I’ll admit it.) However, Kim can’t be the queen of every show – there’s another star whose surrogacy is even more interesting  to us. Her name is Erica, and she’s expecting 11 babies by two fathers from surrogates in January 2018.

Sounds a little out of control doesn’t it?

Why would Erica have 11 surrogates due in January while also being pregnant herself and due in March? The answer is simple: she has superior genetics.

And why are we so obsessed with her genetics?

Kesslers Erica 0583 is an 8-year-old donor cow at my family’s ranch, Kessler Angus, and she’s on a roll producing superior calves. As a purebred Angus cattle operation, our focus is improving the genetics of our herd so that the bulls we sell to other ranches will produce calves that make money at market, perform well in feedlots, and produce a high-value end product for American dinner tables.

Erica’s first three bull calves have sold at or near the top of our bull sale, bringing $24,000, $18,500, and $14,000 going to other leading Angus cattle ranches. Her two daughters have been standouts in within the herd. Erica gained the recognition of Pathfinder status from the American Angus Association which identifies superior cows in the breed based on their calf records with emphasis on regular calving and above-average performance of offspring. In short terms, we want more of her productive genetics around.

How does a cow become a donor or a surrogate (recipient)?

We use Embryo Transfer (ET) technology. ET is a tool that allows us to produce more offspring from elite cows. The process involves hormonal treatment of donor cows to cause multiple follicles to ovulate. The donor is then bred following her superovulation and estrus. Around a week after insemination, her embryos are non-surgically collected (flushed) from the uterus and transferred into recipient cows that will serve as her surrogate mothers for those calves. If there are no recipient cows available at the time, the embryos can be frozen, stored in liquid nitrogen, and put into recipients at a later time. This is basically the same process as when a woman goes through IVF embryo transfer to start a family.

We use other cows within our herd as recipients and they raise the calves through weaning just as they would their own. The recipient cows chosen have proved good maternal instinct and the ability to raise fat, healthy calves.

While Kim Kardashian might be guarding the identity of her surrogate, Erica hangs out with hers every day. However, she is a cow, and therefore has no idea what a surrogate is or that she has 11 of them. A cow’s knowledge of genetics is non-existent. They mostly worry about eating and caring for calves. We do the rest for them.

The recipient cows weren’t overly excited about being photographed in 30 degree, rainy weather while they wander through slushy snow looking for leftover hay from this morning, only eight of them participated and even then weren’t very enthusiastic. But cows don’t have Kardashian level glam squads, and don’t know about filters, so here they are in all their soggy, cold beauty – with just over a week left until their due dates. One of them actually calved last night and had a bull calf! 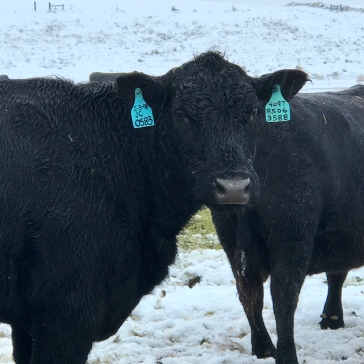 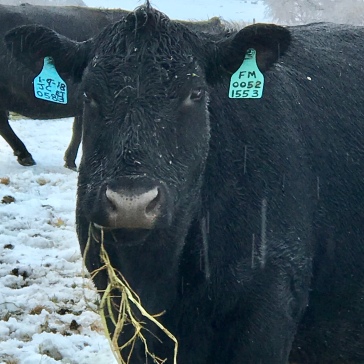 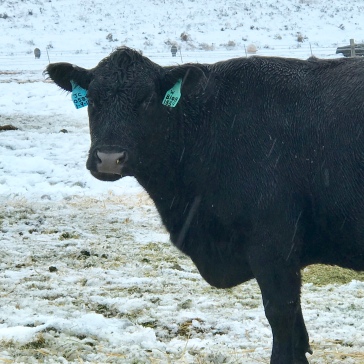 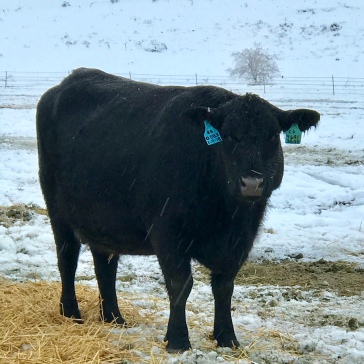 All of our cows have a 4-digit tag/tattoo number that is given at birth and used as their identification number throughout their life. They’re also given a registered name with the American Angus Association. Erica 0583’s recipient cows are identified in the herd with their own tag number, and also an added tag in their right ear telling us that they’re carrying someone else’s calf. As a registered cattle operation, we have to know and keep record of every animals mother (dam), father (sire), birthdate, and weights at various stages of their lives.

Isn’t it cool to know that a cow can go through the same process as a woman can to produce offspring? Some of the technology that we use every day in the cattle industry is just as advanced as what is being used in human medicine. I bet Kim doesn’t know that many cows like Erica also have surrogates due in early 2018 just like she does.

Did you know that we use Embryo Transfer technology in cattle? Feel free to leave any questions you might have in the comments!

2 thoughts on “Kim Kardashian Isn’t The Only Star Using a Surrogate.”